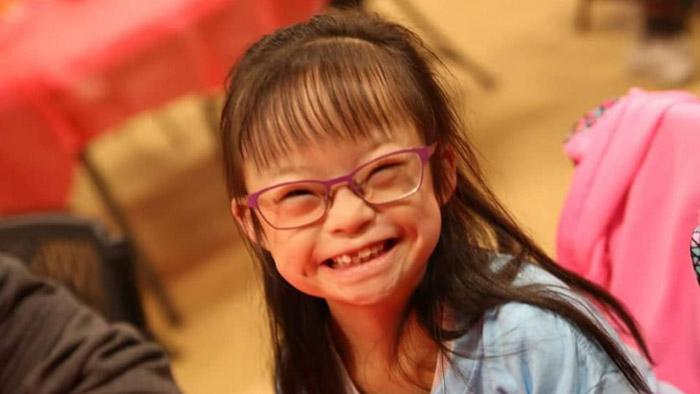 Dental care is important for everybody, but people with Down syndrome can have a number of differences that can require special attention.

What is Different About the Teeth of People With Down Syndrome? What Can I Do to Prevent Cavities and Gum Disease? How Do I Find a Dentist? What Can I Do About My Child Grinding His or Her Teeth? Additional Resources:

What is Different About the Teeth of People With Down Syndrome?

People with Down syndrome may have small teeth, which can cause spacing between the teeth.  They also tend to have a small upper jaw.  This may cause crowding of the teeth and may result in the permanent teeth being “impacted” because there is no room in the mouth for them to come in.  The small upper jaw may create a situation where the top teeth do not go over the bottom teeth the way they are meant to; instead, the bottom teeth may be out further than the top teeth in the back of the jaw, the front of the jaw, or both.  It is also common that the front teeth of people with Down syndrome do not touch.

Orthodontics (braces) may be able to improve some of these issues.  Orthodontics require a lot of cooperation and make the teeth even more difficult to keep clean, so it may not be possible in all people. It may be a good idea to wait until a child is older and able to tolerate it a bit better.  Having orthodontic appliances in the mouth can also pose challenges to speech.  Children without Down syndrome typically adapt their speech quickly; however, in a child with Down syndrome, where speech may already be an issue, adapting to the appliances may be very difficult.  Therefore, it may be a good idea to delay orthodontic treatment until a child is older and his or her speech is further along.

People with Down syndrome are at an increased risk for gum disease (periodontal disease).  Even when individuals with Down syndrome do not have a lot of plaque and tartar (calculus), they get periodontal disease more frequently than others.  This is because people with Down syndrome have an impaired immune system and do not have some of the natural protections against the disease that people without Down syndrome have.  To prevent gum disease brush twice daily, focusing the bristles along the gum line, floss daily and be sure to visit the dentist regularly to have gum health monitored and to take X-rays to monitor bone levels.  If the gums bleed that means that they are inflamed. Brushing and flossing should not be stopped because of this.  In fact, brushing and flossing will keep the gums clean and help to minimize the inflammation.

What Can I Do to Prevent Cavities and Gum Disease?

How Do I Find a Dentist?

For children, the American Academy of Pediatric Dentistry website can be a useful tool in finding a dentist.  Pediatric dentists have 2-3 years of education after dental school in the care of children, including kids with special needs such as Down syndrome.

For adults, general dentists’ comfort levels with some of the unique needs of people with Down syndrome may vary.  A general dentist who has completed a general practice residency, 1-2 additional years after dental school, has extra training in caring for patients with disabilities.  The Special Care Dentistry Association is a resource to find a dentist experienced in treating people with Down syndrome.

You can call your local dental school, because they will typically have residents or faculty who are experienced in caring for people with Down syndrome.

Some hospitals have dental departments and these dentists are typically trained in caring for people with Down syndrome as well.

What If I Do Not Think My Child Can Cooperate for Dental Care?

Pediatric dentists are experienced in working with children of all ages and children who have different abilities to cooperate.  Pediatric dentists have many skills to help children have a successful dental visit.  Some children who need dental treatment may need some form of sedation.  Your dentist will be able to discuss this with you depending on your child’s dental needs and medical conditions.

Do People with Down Syndrome Need to Take Antibiotics Before Going to the Dentist?

People who have, or have had, certain kinds of heart defects need to take antibiotics before their dental appointment.  Ask your physician or cardiologist if antibiotics are needed and be sure to inform your dentist of all health conditions, including heart issues.

What Can I Do About My Child Grinding His or Her Teeth?

It is very common for children to grind their teeth.  Typically it does not cause dental problems, and children tend to grow out of it on their own. However, sometimes children with neurological disabilities do not outgrow it or they do it so severely that it causes damage to the teeth.  A dentist can examine your child’s teeth to ensure that the grinding is not causing any problems.  Typically, mouthguards are not made for children who grind their teeth, because the risk of the child choking on the mouthguard if it breaks is too great.